My Art Journey | When did I Begin? 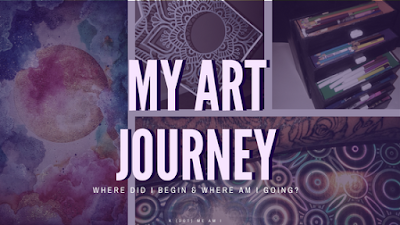 Where do I begin?

For the most part, I've always really been into being creative but when I was younger it came mostly out of "need".

You know how when you want something but you either can't afford it or whatever is available to you doesn't exactly fit your needs but "it'll do".  That's basically it. When I was young, I wanted things to fit me. I've always been the type to like systems and be in need of structure and so creating things was a way for me to get that.

I think the biggest bittersweetness of it all was, i was without. If I wanted these things I couldn't just go and get them. I didn't have the money nor the means of acquiring said money. Sure my parents would provide certain things but for the most part, I was on my own.

The best example I can think of would be when I still played with dolls. I wanted my dolls to have a couch, but at the time I only had maybe, one couch; so I improvised using a couple VHS tapes in my possession and I figured the little white circles would be like the buttons that are on couch cushions haha, so one for the bottom, one for the top . It worked. And my dolls didn't complain.

So this brought on good innovation on my part. When I didn't have but really wanted...I could just make it and that idea was great to me because not only would I have this thing but it would fit me so well. The color, the size, everything . Instead of buying something from the store and making it fit in your room and dealing with the colors they had. Sometimes we have nooks and crannies that are of a certain size in our homes. Making something to fit within those nooks was so satisfying, plus of course whatever I made, served its purpose well. It wasn't always great looking and I'm still learning in this area but its really fun.

Now as for my drawing endeavors. Well...for starters the best memory I have of my "creative awakening" was in kindergarten, I believe. We were making alphabet books and of course, "A" for apple. So while drawing my little picture when I began to color this apple, I started with crayons then layered with colored pencils. This was such an exciting moment for me because, there wasn't much white space. You know how you're using crayons and it have those marks of white on the paper that the crayon won't fill...using the colored pencil scrapped the excess wax front he crayon and filled those white spaces. I was in awe haha.

So then after I was hooked. I always loved coloring and being meticulous in that. Staying inside the lines. Outlining. Politically correct colors (brown bears instead of pink). But then as I got older I noticed...I don't have to be politically correct all the time. I can have pink bears. orange bears. blue flesh, ect. as long as I stayed in the lines and made it pretty, no one would care...that is "art". So all through school, I somewhat flourished . Practicing little by little different things and methods, figuring out what I liked. 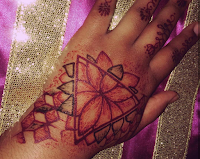 From here around 10 or 11 years old, I was introduced to Henna. Now, henna wasn't exactly something that I wanted to do like..as far as boutiques aha, but I wanted it. I always did but there was never enough people to do it or it was expensive so...just like with my dolls..I just learned. If I can't get someone to do it...I'll do it.

And over time, obviously I got better and people noticed, so I started doing it for others and I grew to really love it. Its so versatile and different and people around me also loved it, so it made sense to just continue.

So from here...I started experimenting. Social media began to have more of a presence in my life and I started to discover other forms of art by other people all around the world using so many different types of medias.

I wanted to do some of all it. I dabled in graphic design using GIMP... (oh the memories). Learning these programs was less than great but I enjoyed it because I was always able to see instant progress. If I followed directions...there it was in my face. It was great.

From here I dabbled in coding. I got a slight introduction to coding in high school taking a computer class. Never went too far, although I tried. I think the only really huge thing that stopped me was no reward. I was learning coding but I never really seen myself making a living doing things with code because I never could see myself being proficient in it. It's a long story but I have the basics haha, starting off with BBCode and basic HTML to CSS and CSS3.

Through this time I was learning what I liked and didn't, in my creative adventures. 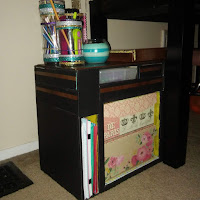 Turns out, I love sparkle and holographic materials. There's something about the way a thing so simple can be so mezmorizing as it reflects light.

I enjoy cardboard and making things out of it.

I like plaster for some odd reason, haven't really mastered art with it. My ideas were going a thousand miles per hour at one point because I wanted to make art, but I also wanted to make art that other people would want too. (insert Kay | The Entrepreneur brain here). Even though I wasn't as confident in my craft..something has always pulled me in that direction anyway and has never given up.

But anywho, I wanted to make sculptures for people. Specifically I wanted to make sculptures of hands with henna. I could make the hands from plaster molds then put henna on them. BUT didn't really work for me and I started to lean more toward other things. (psst..if you're in need of an algea; never goes bad, molding material.. let me know. I still have it and I really don't know what to do with it hahah).

So from here I learned more about clay sculpting on canvases and glass. Papercutting (oh dear papercutting, one of my more newer loves.) I started to love glass painting and watercolors. Still love glitter. However even with all this I always liked the idea of a minimal approach. Even with my love of color, that was a priority of mine for any art I would sell because I tried to look at it from the point of view of a potential customer. Perhaps you want a painting of sorts for your wall in the living room or your room. Too many colors can be distracting, however if it had accents it would look amazing. Right? right!?.

So I set off learning a style that would fit me. Incorporating every single media I love into this idea. Among other things in the works, this is the area in which I plan to grow my portfolio. Over the years I have grown to love many things and did art based on that. But now that I have a style, I must work out those kinks and build my portfolio based on that. In the near future I do hope to explore other areas. More art, selling it, possibly a YouTube channel, ect. It all just depends.

So that is my journey, it was a lot but if you're still reading. I appreciate that. Hopefully there were little bits within it, you could identify with or maybe become inspired by. Feel free to comment your journey. I'd love to read about it! One of the many reasons I'm blogging!