Let’s Talk | Forced Trends and Why? 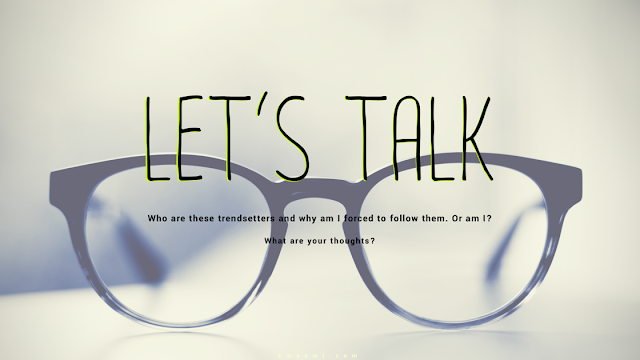 Imma just put it out there... I don’t like’em. Hence the word "forced’ :ahem:

There’s something about it that really doesn’t sit right with me.
Don’t get me wrong. I understand a business’s need to keep up with what they think will sell. But what exactly is the ‘standard’. For example, if you go into any given dollar store there is a standard set of colors they will display in specific product sets. Bowls, cups, storage boxes, sheets and throw blankets, etc. Two summers ago, it was mint and watermelon or salmon. Now it’s like...green and purple or something. Why is that? Where is this coming from. Yes I get season themes but those colors weren’t the standard. Not to mention clothing stores and their need to keep up with trends. Where is the retrend coming from?

I should probably look this up...

But the biggest reason I wanted to make this post is because...I’m a four eyed female right, and I have NEVER been a fan of extra large goggle-esque glasses in my life. I’d often tease my mother over the excessively large choice of eyewear back in the 70s and 80s. I just don’t understand . Out of everything, wouldn’t it be cheaper to make them smaller...perhaps that was the gimmic; ‘If I make the lenses huge...we can charge more.’ Conspiracies are so fun.

But anyway. As many of you may see throughout the land, this trend is back. The old school large hipster / young librarian glasses. And its okay . I’m not upset by that. They are genuinely really nice looking on some peoples faces. But I am I a lover of very thin framed rectangle glasses. That’s been my thing since I started wearing them. It just works for my face. But no. I cannot find a pair...not even in expensive brands that cater to this design. Yes...I’ve checked online too. They are the exception, meaning that eyewear type. Now...even though I said I would do it in this very post {just pretend I did it awhile ago and I’m bringing the information in a pocket sized essay on the matter so I can say these words}

According to my research . { I don’t always think these things through, I’m more impulsive. But I prefer ‘spontaneous’}. Anyhow, apparently these trends just pop out of no where for no reason and no one knows why. They just tell you.

"This is what’s popular" . In other words . Take it or leave it. Now, don’t get me wrong, there are rectangle framed glasses but the kind I prefer are usually too thin, I.e 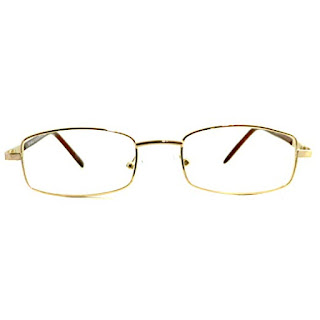 or the lenses is still too wide. I.e 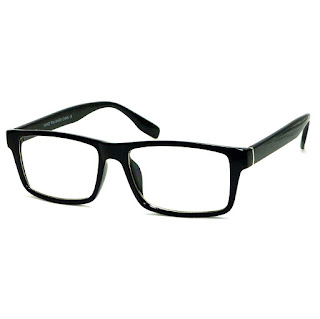 Still not a fan.

So what is a person with this dilemma supposed to do. Go vintage shopping? Um, I don’t think so. These glasses are far from vintage, what we have now is equivalent to that.

I mean...I suppose I could make a change and try something new but I don’t always wish to do that with everything in my life. I think it’s called ‘if it ain’t broke don’t fix it’, :sigh: it’s like when skinny jeans were the thing. I like regular boot-cut...relax.

I won’t complain too much though as seeing in the goal we’re trying to reach here but ya know. If you’re spending money, especially at those costs...you should opt to find what you like the most. {that’s all I’m saying}. And like I mentioned above, these trend sets are not just in fashion. I’m pretty much just wondering, where do you go to get what you want. For example . If I wanted a lime green throw blanket instead of all these odd earth tones. I’m a colorful person. Maybe it’s all in custom. I’ve been saying this lately as well. ‘Tailor-make’ stuff so that it fits you.

It’s not always easy for everything in your life but...maybe it is. You never really know. Unless you ask.

So, after actually researching the idea more, it is what they call ‘DOI’ diffusion of innovation theory. Which basically says..there are some trends setters who come out of the blue, usually eccentrics going outside of the norm, then it’s taken up by groups that latch on to one another . So first the ‘influencer’ , then the highly influenced, then the followers {global phenomenon}, then the buzz killers aka moms and dads {okay I made that up}, but basically what they’re saying is...once it reaches these types of people, the trend is over and another is due to come about, if it hasn’t already.  So I see this as clear as day. This is the theory business people latch onto when investing and making clear executive decisions. Cool. But..how does one become the trend setter? Takes a lot of failure and ridicule I’m sure but...why not just be the eccentric and move on. Well..that’s usually the idea anyway and I identify with that more. I don’t care to be first in things, but I also don’t care to follow trends . I just do what I like. How can I make those ideas the most beneficial for me and mines...

It’s like this in business for me too. I read about the rules and the systems that may or may not work for people but I just can’t seem to latch on to much. Like schedules and all this. I just want to do what I feel is best. Following a regimen in this sense has never been something I could do. Remember when I said I prefer spontaneous. That’s pretty much it. What a revelation! In all seriousness, I simply cannot do all things in my life in a way I’m told to. Never works. Perhaps that’s why I say tailor make stuff...it just makes the most sense, right? Why wouldn’t you? If learning, having or doing something a specific way is not working for you...you shouldn’t quit or give in to the trend...you just work on it until it does or make it how you like. A few extra steps but...why not. It’s what YOU like. Wouldn’t it be worth it? But I see here..that’s not the standard. That’s the exception. And I think that’s sad. I’m definitely going to expound on that more here soon.

What are your thoughts? Anything you want but can’t find because it’s not ‘trending’. Do you feel the need to tailor or custom make things?